I don't know if you've ever had a moment like this, but I looked around our apartment about a week ago and suddenly hated everything. Just wanted to throw everything out and start all over... which of course will never happen for various economic and ecological reasons. But at least some changes were in order. So:

1. good-bye to the horrid old plastic/aluminum folding chairs we were using as dining chairs (thanks, Freecycle!), and hello to these new lovelies in black from IKEA.

2. Similarly, good-bye to the giant unwieldy pink high chair of doom, and hello this small vintag-y one, also from IKEA.

3. Also, good-bye to this fairly useless and apparently unwelcoming plastic table (I say unwelcoming because Lara never ever wanted to use it for anything!), and hello to a more adult IKEA model which I have since modified in a pretty cool way. More on that in a later post.

At the same time that I ran wild in the IKEA warehouse, I also decided to try to reupholster a few things. I found a bunch of cool fabric in the IKEA As-Is department, and have transformed Lara's outgrown ride-on toy. It was one of those faux-velvet plush snail ones (see picture inset), and when I cut off the fabric, I discovered that it had pretty cool-looking guts: 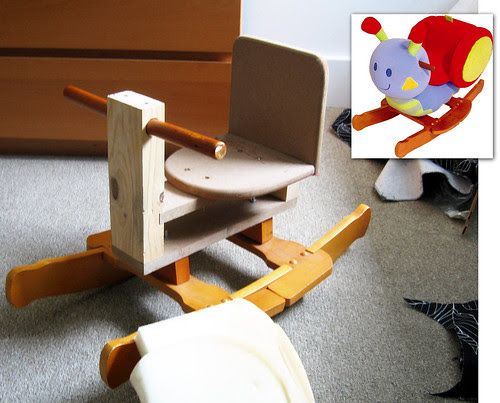 With some inspiration from this ride-on toy, I made this: 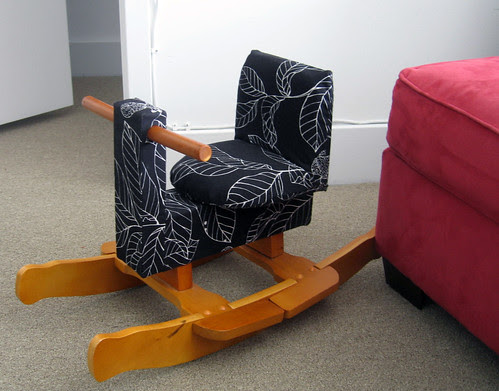 Looks pretty cool if I do say so myself. This was a pretty finicky project, I have to admit - because of the way that the seat and rocking bottom are attached, I basically had to hand-sew the fabric directly onto the thing.

More redoings coming up!
Email ThisBlogThis!Share to TwitterShare to FacebookShare to Pinterest

I could not resist - I had to look it up. It's awesome!!! It looks completely different - I would have never guessed what it used to be. The chair now looks hip, modern, and much more like you. Did Lara test it?

Wow. Wow. Will you come redo my entire house?

Okay, you don't have to answer that. But my "maybe" trip to IKEA this week just became a definite one.

I *constantly* have moments where I hate our entire apartment and try to start over. I quell that with small projects, like reframing some vintage posters I had etc. But the now-grown-up to rider is AWESOME!

I see a power saw in your future! Great results on all projects.

What a great project! I hope you don't mind me putting it on my baby-blog, www.obbosiblog.blogspot.com
It's in Icelandic (as I'm Icelandic ;) and I'm constantly looking for great ideas that people can get inspired by. So happy I found your blog via designsponge.
Harpa

wow. that's amazing. Although the original design was *cute*, I would have been tired of looking at that. Your recovered one however, looks very classic. I'm so glad someone featured you and gave you the attention and applaud it deserves!